This isn’t a clip from Jil Sander’s Runway Show… promise. 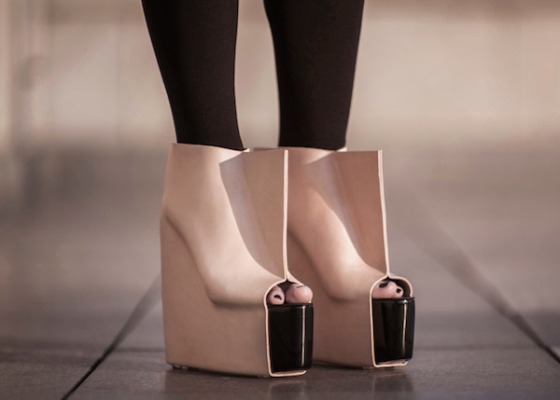 With minimalist designers, such as Maison Martin Margiela, Céline, and Jil Sander, it is never certain what exactly is in store each season (see The Paper Bag clutch).  While these rectangle box shoes appear to share the same affinity for modernism, they are created by Czech designer Maria Nina Vaclavek, and were curiously inspired by the first prehistoric man. 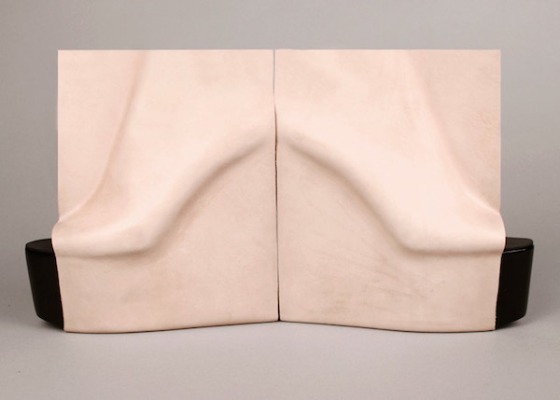 “The caveman hunted down an animal, skinned it and wrapped the leather – still raw and warm – around his foot where he tightened it with bast. The leather adapts the shape of the user’s foot. I found this technology very interesting and decided to work with it further,” the designer said about the rectangle shoe.

She used this method to wrap a piece of wet vegetable-tanned leather around a platform and a shoemaker’s last. When it dried, the leather became rigid and formed the solid shape of the shoes.  The last was wider than the platform, so the outline of a foot was created as the leather curved over the shape, showing where the foot sits within the geometric outline, according to Dezeen.

The shoes contrast between geometric forms and the natural organic shape of a foot.

Vaclavek designed the shoes while studying at the University of West Bohemia in Pilsen, Czech Republic, and her designs received first prize at the Design Talent 2013 award announced last week.

Although she insists they are rather comfortable, I’m simply not sure if they’re quite my style.

What do you think of these unique shoes?